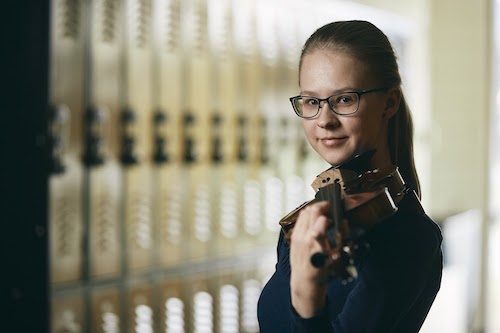 Athena Carson recently graduated from Montana State University with a BA in music, where she has studied composition and orchestration with Eric Funk and counterpoint with Dr. Greg Young. She also studied composition with Dr. Young while in high school. Athena plays violin in the Bozeman Symphony and studies violin with Angella Ahn and baroque violin with Carrie Krause. In 2019 Athena’s composition Dialogue won the state level and earned honorable mention in the regional level of the Music Teachers National Association (MTNA) composition competition and was premiered on a faculty recital by Greg Young and Carrie Krause later that year. Athena was commissioned to write a symphonic work (titled Anima Mundi) for the MSU symphony as part of NCUR 2020 (the premier was postponed due to COVID).

Athena’s music is inspired by her broad musical interests, including historical performance practice, Soviet musicology and her experience as a violinist in the symphony. She is particularly inspired by the music of Alfred Schnittke and connects with his polystylism technique in which contrasting musical elements are combined through means of quotation and allusion. In developing her own use of polystylism, Athena has been able to combine her musical interests into a unique idiom.