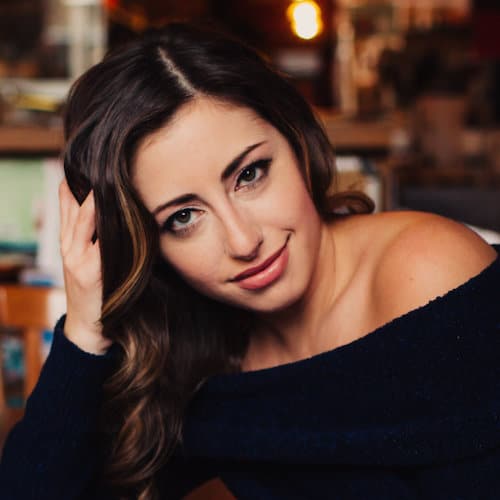 Praised by Opera News as “a warm, elegant mezzo,” Tascha Anderson originally hails from Montana and has also been esteemed as “emotionally rich,” “a brassy mezzo with flair,” and a “dusk-edged mezzo.” Next up, Ms. Anderson will make her debut with the Oratorio Society of Richmond, portraying the role of Daniel in Händel’s Susanna, to be performed on International Women’s Day. She will also have the privilege of previewing excerpts from the show on NPR, the week of the performance. An advocate of new opera, Ms. Anderson created the role of Pamela in Evan Mack’s Roscoe, first premiering at Seagle Music Colony, followed by a concert with Albany Symphony, where she sang alongside soprano Deborah Voigt. The Times Union regarded her as “a standout.” In January, she performed in the Boston premiere of Haroun and the Sea of Stories, as well as a recording, with Boston Modern Orchestra Project, one of several recordings Tascha is featured on. Other recent performances include the title role in The Tragedy of Carmen with Tri-Cities Opera, Jacqueline in Gounod’s Le médecin malgré lui with Odyssey Opera, Florinda in Into the Woods, with Utah Festival Opera and Pastore 4 in Monteverdi’s L’Orfeo with Chautauqua Opera. Last year, Ms. Anderson made several company debuts. First with Encompass New Opera Theatre, appearing in American Opera Projects’ Page to Stage concert at The National Opera Center, followed by a debut with Charlottesville Opera, where she was thrilled to revisit the role of Carmen in The Tragedy of Carmen, and later with the Glens Falls Symphony Orchestra in New York to sing Manuel De Falla’s masterpiece El amor brujo, as the saucy Candelas. The Glens Falls Chronicle regarded her as “fiery,” and “dusk-edged.” Ms. Anderson holds an M.M. in Voice Performance from The Boston Conservatory, and a B.A. with music emphasis in Voice Performance from Pepperdine University. When she isn’t on the stage, Tascha takes pride in her nomadic tiny-living off-grid lifestyle, roaming the mountains in her camper with her partner Michael Gray.