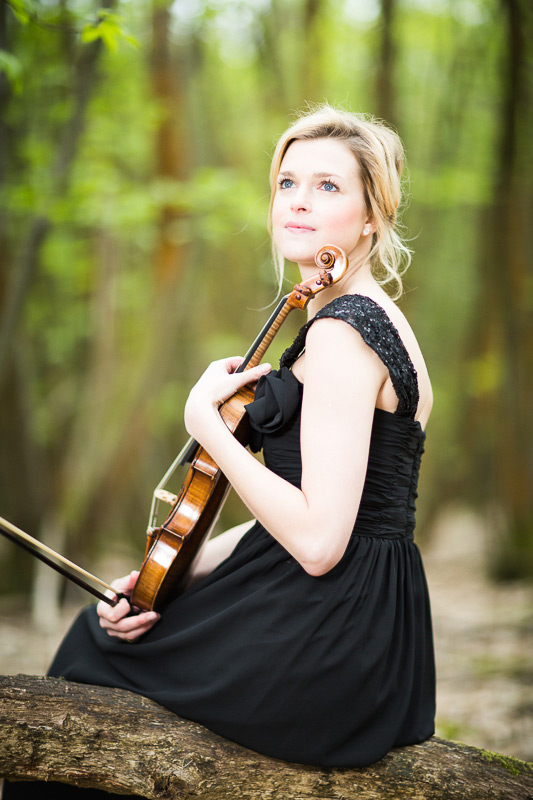 Recently graduated from the Royal Academy of Music, Davina Clarke is fast establishing herself as a violinist of the highest calibre. She plays regularly with some of the UK’s most highly regarded period ensembles – the English Baroque Soloists, Orchestre Révolutionnaire et Romantique, Academy of Ancient Music, Orchestra of The Sixteen and the Orchestra of the Age of Enlightenment- but her performance repertoire encompasses anything from Bach to Birtwistle.

Davina was a scholar at the Junior Royal Academy of Music before subsequently winning the McMynn Scholarship to read music at The University of Manchester: there she studied with Benedict Holland (RNCM) and led the University Symphony Orchestra, String Ensemble, and Sinfonietta. She graduated with a First Class Honours, having been awarded both the Proctor-Gregg Performance Prize and the Hargreaves Academic Award in her final year.

With the support of the Golden Charitable Trust, Davina pursued a Masters, specialising in historically informed performance at the Royal Academy of Music, where she studied under Simon Standage and Rachel Podger. During her time there, Davina won the Roy Burcher and Tebbutt Exhibition Awards, was a Finalist in the Nancy Nuttall Early Music Prize and was also Very Highly Commended for her performance in the Mica Comberti Bach Prize.

On graduating, she was awarded a First Class Distinction and a DipRAM for an outstanding Final Recital. In addition to her studies, Davina was leader of the Academy’s Baroque Orchestra, and made her Wigmore Hall concerto début with Rachel Podger. She also toured extensively around Europe as co-leader of the European Union Baroque Orchestra under Lars Ulrik Mortensen, Enrico Onofri and Alexis Kossenko.

She continues her long association with the Royal Academy of Music as a Guest Principal in the Kohn Bach Cantata Series this season, and has recently toured the J.S Bach Double violin concerto with the Royal Academy under Masaaki Suzuki, making her solo début at the Lincoln Center. Last year, she accompanied Sir John Eliot Gardiner in a series of J.S Bach recitals to celebrate the launch of his new book, ‘Music in the Castle of Heaven’ in New York. Following her inaugural year with the English Baroque Soloists, she and fellow members of the Monteverdi Choir and Orchestra are in the process of establishing a period chamber ensemble.

Davina plays on a 1685 Francesco Rugeri violin, generously loaned to her by the Stradivari Trust.