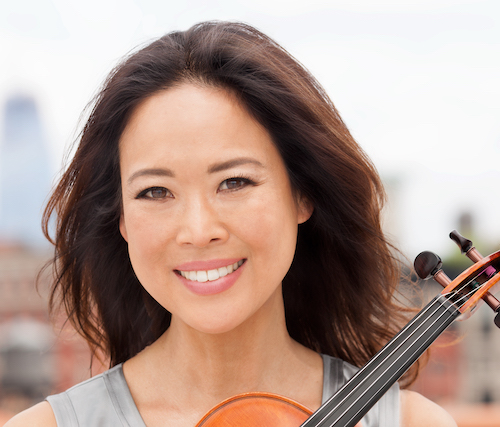 Violinist Angella Ahn has had an extensive career, performing in over 30 countries and in every state in the U.S. As a member of the Ahn Trio, she has played in venues as diverse as the White House, the Jazz Dock in Prague, Buenos Aires’ Teatro Colon, Vienna’s Musikverein, New York’s Lincoln Center, Leipzig’s Gewandhaus, Beijing’s Concert Hall, Istanbul’s Aya Irini in Topkapi Palace, the iTunes Festival, and TEDWomen.

In addition to live performances, Angella has an impressive discography with her trio. The nine enthusiastically received albums include Lullaby for My Favorite Insomniac, released by Sony (No. 8 in the Billboard Charts for 26 weeks); Dvorak, Suk and Shostakovich, released by EMI (winner of Germany’s prestigious ECHO Award); and their most recent, Blue, a musical diary. She has recently released two digital tracks with her trio, “Nuvole Bianche “and “Candybox.” Wide-ranging collaborations have allowed the trio to work with modern dance companies (including a B-boy group), film directors, rock bands, and DJ Spooky. Because of their eclectic interests and innovative exploration in music, New York Newsday has called the trio “Classical revolutionaries.”

Angella enjoys living in Bozeman, Montana, where she is currently Associate Professor of Violin and Viola at Montana State University. The depth of her experience and knowledge has made her perfectly suited to help the next generation of young musicians, and she is a devoted and sought-after teacher, being named by the university both a “Most Valuable Professor” and “Professor of the Month”. Beyond her teaching, she serves on the Montana Arts Council and on the Advisory Board of Intermountain Opera. She is Artistic Director of Montana Chamber Music Society, bringing world class chamber music throughout Montana. She is also Artistic Director of Bravo! Big Sky Festival, where she is heard performing with many guest artists such as Matt Haimovitz and Rachel Barton Pine. She has often taught at Mark O’Connor’s Fiddle camps and has been featured with musicians as diverse as Phil Aaberg, Darol Anger, Emmylou Harris, and the late John Prine. She can be seen in “Angella Ahn and Friends,” a program presented by Montana PBS’ Emmy award- winning 11th &

Grant with Eric Funk, as well as in The Hive, a film produced by Tippet Rise Art Center in collaboration with the acclaimed sculptor Stephen Talasnik and director Matthew McKee.

Angella has given masterclasses throughout North America, Asia, and Europe. A graduate of the Juilliard School of Music, she shares the widely regarded pedagogy of her mentors Dorothy DeLay and Hyo Kang. She plays a 2013 violin made for her by renowned luthier Sam Zygmuntowicz of Brooklyn, New York.