← Thank you, Give Big! Sonata Tramontana available for pre-order →

Our Bozeman graphic designer, Matt Cameron, created the Bach Roads of Montana logo.  He was inspired by J.S. Bach’s initials, in his own hand. 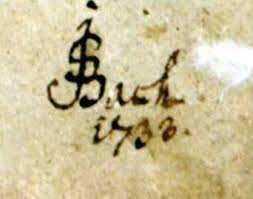 From “Manuscripts, Pens and Composers,” by Jeffrey Dane:

In Bach’s day paper was relatively costly, and this may partly account for the economy of his musical notation, which in his large scale works is often quite dense and minimizes waste of paper and space. Some of his manuscripts (as do those of Handel) look almost like a picture of an army of ants scurrying about on the pages. Many of Bach’s manuscripts have a few extra bars crowded on to an additional staff at the bottom of a page. As an expedient he would sometimes use tablature notation, a system of musical “shorthand” (even then nearly obsolete) utilizing numbers, letters and other symbols in lieu of musical notes.

Carrie Krause plays Bach using his hand-written manuscripts, feeling it gives her a sense of movement and an insight into the composer’s intention.  Here she is, playing during the Biking for Bach event, in Three Forks. Click on image to enlarge. 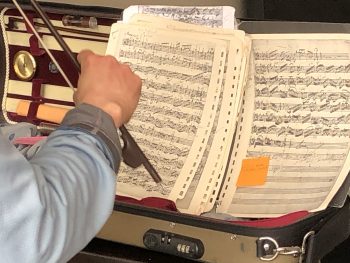 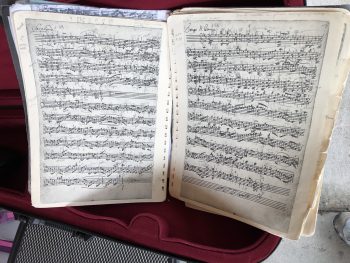