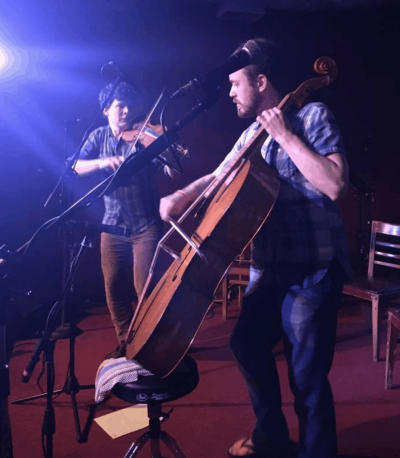 Tim Macdonald & Jeremy Ward, a Scottish Baroque Duo from Chicago, will perform during Noon Notes on Monday, October 7, Noon in the Community Room of the Bozeman Public Library and one Tuesday, October 8, Noon in the Hager Auditorium of the Museum of the Rockies.

Driving dance tunes, plaintive laments, unusual harmonies, surprising forms, fierce songs. From improvised divisions over a ground bass to tender-yet-untamed slow airs to a sonata based on a ballad, this program showcases the huge range of music played by Scottish violinists in the 18th century. There is an inherent feeling for wild music in Scottish nature, and there is a definite relationship between the rhythms of reels and the Highland fling and the music played.

Praised for his athletic and impressive and stylistically Scottish playing, Tim Macdonald is a regular performer, scholar, composer, and teacher of early Scottish fiddle music ~ and was the first US National Scottish Fiddling champion to win on a Baroque violin. Cellist Jeremy Ward is founder and organizer of the Chicago folk music showcase and is the cello instructor at Triton College as well as principal cellist of the Chicago Arts Orchestra.

Noon Notes at the Library is a free program held on the first Monday of each month from October through May (no January concert), and is an outreach program for the Montana Chamber Music Society.