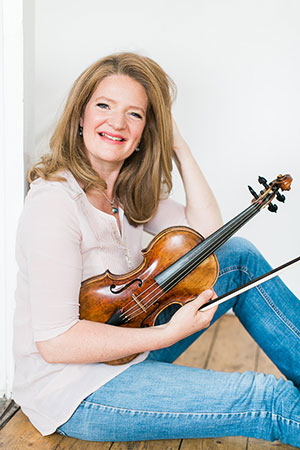 Rachel Podger, “the unsurpassed British glory of the baroque violin” (The Times), has established herself as a leading interpreter of the Baroque and Classical music periods. She was the first woman to be awarded the prestigious Royal Academy of Music/Kohn Foundation Bach Prize in October 2015, Artist of the Year 2018, and Ambassador for REMA’s Early Music Day 2020. A creative programmer, she is the founder and Artistic Director of and her ensemble Brecon Baroque. Rachel is Patron for the Continuo Foundation.

Following an exciting and innovative new collaboration, A Guardian Angel, with the ‘impeccable’ (Gramophone) vocal ensemble, Rachel was thrilled to be one of the Artists in Residence at the renowned Wigmore Hall throughout the 2019/2020 season. The series features Rachel in all-Bach performances as a soloist and with Brecon Baroque. Alongside this, Rachel and Christopher Glynn recorded the world premiere of three previously unfinished Mozart sonatas which were completed by Royal Academy of Music Professor Timothy Jones for release in March 2021.

Rachel featured in The VOCES8 Foundation’s LIVE From London festival in a new advent version of A Guardian Angel. She performed solo Bach for Gramophone Magazine’s Winners’ Digital Gala, appeared in Bitesize Proms, BOZAR at Home, Living Room Live, Baroque at the Edge, and a collaborative disc by Musicians For Musicians Many Voices on a Theme of Isolation. Rachel presented BBC Radio 3’s Inside Music and directed a new arrangement by Chad Kelly, The Goldberg Variations Reimagined. Upcoming engagements include recording a selection of Beethoven sonatas and performances of Mozart and Beethoven with Christopher Glynn, a return to Philharmonia Baroque and San Francisco Early Music, a Four Seasons collaboration with Academy of Ancient Music, and further performances of Bach Cello Suites, The Goldberg Variations Reimagined, and A Guardian Angel.

Rachel is a dedicated educator and holds an honorary position at both the Royal Academy of Music and the Royal Welsh College of Music and Drama. She also has a relationship with The Juilliard School in New York.