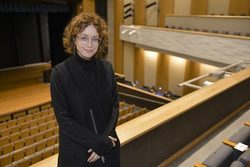 Erin Hanke holds a doctorate in historical music from SUNY Stony Brook where she was teaching assistant to Arthur Haas and recipient of a full Staller scholarship. Her doctoral paper considered the setting of Johann Sebastian Bach’s chorale “Ich habe genug” within Alban Berg’s Violin Concerto.  Her lecture recital was entitled “Bach’s Humor: The Capriccio in B-flat Major as Parody.”

Dr. Hanke previously served as Director of Music at Bethany Lutheran Church in Naperville, IL, where she created and directed Concerts At 3, a concert series in the western suburbs of Chicago, IL.  While in New York City, she was concert manager of Music Before 1800, NYC’s longest running early music series.  Dr. Hanke also directed Kielbasa Harmonika, a NYC based period performance ensemble, dedicated to live performance of historical works and commissioning new works for period instruments.  She is currently the director of the Whitney Center for the Arts at Sheridan College.  Dr. Hanke was artist in residence at the CUNY Queens College Museum of Art for the exhibition Express|Local.  She has appeared at Carnegie Hall in workshop with L’Arpeggiata and Waits Trio.   While at Mannes College she performed at Alice Tully Hall with the Mannes Orchestra and as a concerto soloist with the baroque ensemble.  Dr. Hanke has studied with Christophe Roussett at Piccola Accademia di Montisi, Italy, with Ketil Haugsand at the Academia de Musica Antiga de Lisboa, Portugal,  Ringve Gourse in Norway and in masterclasses with Davitt Moroney, and both Wieland and Barthold Kuijken.  She recently appeared at the Silicon Valley Music Festival in California as both performer and lecturer.

​Dr. Hanke holds a Masters of Music from Mannes College in New York City and completed studies in organ performance with Dr. John Chappell Stowe at the University of Wisconsin-Madison where she holds degrees in Mathematics and Art History.