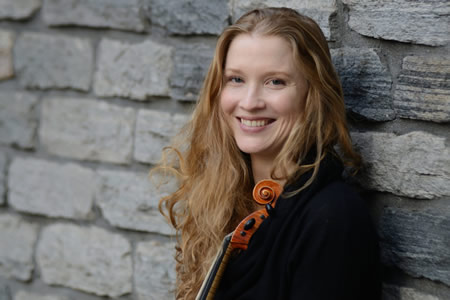 Adriane Post’s baroque violin playing has been described as “exquisite” by The New York Times. Sought after as leader, collaborator and soloist in ensembles across the US, she is a founding member of ACRONYM Ensemble and Diderot String Quartet, concertmaster of the Washington National Cathedral Orchestra, associate principal of Apollo’s Fire, soloist and collaborator with Four Nations Ensemble, and guest concertmaster with groups such as Seraphic Fire and NY Baroque Inc. A tenured member of Handel + Haydn Society, Adriane also performs regularly with Trinity Wall Street Baroque Orchestra, and has appeared recently as guest with groups such as Les Delices, Chatham Baroque and Tenet. Recent and upcoming Festival and tour appearances include Carnegie Hall, Caramoor, Tanglewood, Ravinia and Carmel Bach Festival. Invested particularly in 17th Century and Classical though Early Romantic performance practice, Adriane received her BM from Oberlin Conservatory, where she first fell in love with the baroque violin. She received her MM from The Juilliard School’s Historical Performance program.  Based in New York and Chicago, she was born and raised as a proud Vermonter.