← Get ready to Give Big! Our Brothers & Sisters: online recital April 8 → 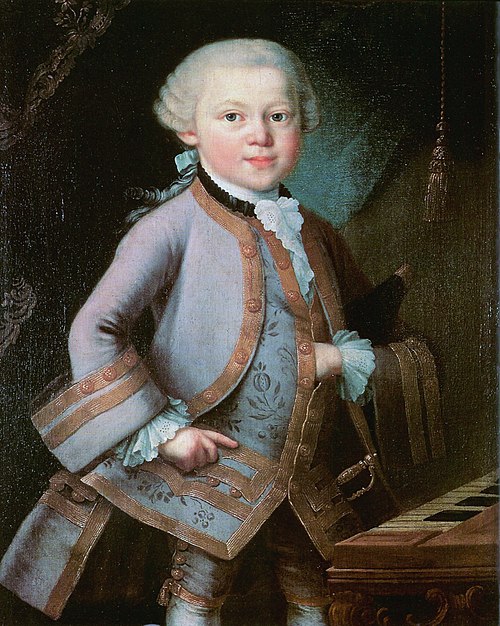 The feature picture is not of Mayr (couldn’t find one), but is an anonymous portrait of the child Mozart, possibly by Pietro Antonio Lorenzoni; painted in 1763 on commission from Leopold Mozart.

The following (without pictures) is taken from a post by Jacob Saunders found here: https://maestronet.com/forum/index.php?/topic/328862-bonhams-auction-coming-up-this-week/.  In the post, he included an In Focus piece he had written for the May 2013 issue of The Strad magazine, about violin maker Andreas Ferdinand Mayr.  A very short German wikipedia entry is here: https://de.wikipedia.org/wiki/Andreas_Ferdinand_Mayr.

On the 8th of May 1719, Andreas Ferdinand Mayr married Maria Magdalena, the widow of the Salzburg Court Lute and Violin maker, Johannes Schon. This is representative of the typical system for upholding workshops of the baroque period in all craft professions and, in particular, a pillar of baroque social security concern for widows and orphaned children. In this system, the widow inherited the workshop, her new husband however the post of Court Lute & Violin Maker, and would, in his turn inherit the workshop as well, upon the demise of his new wife.

Salzburg was, until the early 19th. Century, neither “German” nor “Austrian”, but rather a Bishopric, which was a sovereign state in its own right. The contract as court maker involved servicing and re-stringing the instruments, but contained no obligation to play violin (which need not mean he didn’t). The “Hofschematismus” (a kind of role call for the orchestra) of 1757, includes Mayr as Court Maker, as well as a step-son, (Johann?) Paul Schon, and a certain Leopold Mozart as tutti-violinists.

Mayr is reported to have been born in 1693 in St. Veit (now part of Vienna). I was unable to corroborate this, although Leopold Mozart does, by reporting that Mayr was born in Vienna. Upon marrying Magdalena Schon, he had a workshop in Steingasse No. 25. They had a son, Ferdinand in 1720, and moved to Brodgasse in 1729. Maria Magdalena died in 1730, and Mayr remarried Anna Maria Troger from Tirol, with whom he had his second son, Andreas. We learn from the tax returns, that Mayr in 1742, was living with four children and 1751 that he was working with a journeyman “who is his son”.

Mayr’s main claim to fame in the violin literature is as the maker, in 1746, of Mozart’s childhood violin, which is to this day on display in the Mozart’s house of birth museum in Salzburg.

The violin pictured here is a fine and typical example made by the then 33 year-old Mayr in 1726. This is often described as “Stainer Model”, although slightly annoyingly to those familiar with Stainer. The two piece back with relatively wide edgework and fluting, the ribs, built around a mould with pine blocks and maple linings. One notable feature of Mayr’s work, present on all his violins that I have seen to-date, the nicks of the f-holes appear to have been almost randomly placed, with neither rhyme nor reason, in this case well below the middle of the stem of the f-hole. The deeply cut scroll, with fluting that goes to the very end of the throat, doesn’t have a very curved peg box at all. The peg box still has the remains of an original ivory pin, between the E and D pegs, inserted to avoid the A string fouling on the E peg (a very good idea in my estimation), a feature not unusual on violins from the whole area populated by the Füssen Diaspora. Here it has, as so often, fallen foul of subsequent repairs. The whole violin is covered with the fine red oil varnish with the most slight hint of craquelure, that received the accolades of the Hill brothers in there monograph about Stradvari as near equivalent to the Cremonese.

Andreas Ferdinand Mayr died in 1764, having held the post of Court Lute and Violin Maker for almost 45 years.