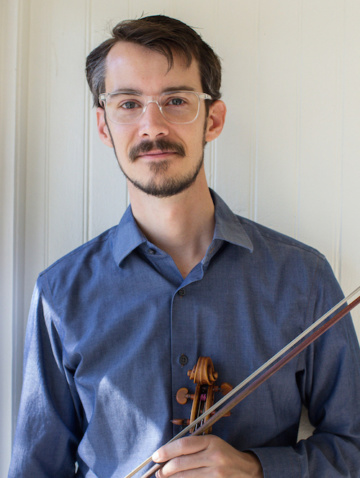 As a composer he often works with forms and ideas found in nature or in other artistic disciplines, working in instrumental, vocal, and fixed media forms, and was described by Alex Ross in the New Yorker as “a composer preternaturally attuned to the landscapes and soundscapes of the West”. His compositions have been featured at venues including Walt Disney Concert Hall, the Gaudeamus Festival, Time:Spans Festival, Hamburger Klangwerktage, Moments Musicaux Aarau, Bludenzer Tage Zeitgemasse Muzik, Miller Theatre, National Sawdust, Issue Project Room, Monday Evening Concerts, and Tectonics Festival Glasgow. The individual musical personalities of performers he writes for are a central consideration in his work, and he has worked particularly closely with the musicians of Wild Up, the Formalist Quartet, Yarn/Wire, and soprano Estelí Gomez. Recent commissions include works for the Los Angeles Philharmonic, The Industry opera company, Yarn/Wire, the Calder Quartet, and violinists Movses Pogossian and Marco Fusi.

As a solo artist he has appeared at the San Francisco Symphony’s SoundBox series, Miller Theatre in New York, REDCAT, and festivals and concert series across Europe and the US. He also was the viola soloist in the US premiere of Gèrard Grisey’s Les Espaces Acoustiques, for which performance the LA Times said he “played with commanding beauty”. As a chamber musician he is a member of the Formalist Quartet, Wild Up, and Wadada Leo Smith’s Red Koral Quartet. He has also performed with artists such as the Quatuor Bozzini, Wet Ink Ensemble, Marc Sabat, and Dante Boon, and has worked personally with a wide range of composers including Christian Wolff, Sofia Gubaidulina, Sir Peter Maxwell Davies, Helmut Lachenmann, Tom Johnson, and Jürg Frey.

As a baroque performer McIntosh is a member of Tesserae, Bach Collegium San Diego, and Musica Angelica, has served as guest concertmaster for baroque operas with LA Opera and Opera UCLA, and has performed with the Washington National Cathedral Baroque Orchestra, Musica Pacifica, and the American Bach Soloists. He is also a frequent recitalist, performing with historical keyboardist Ian Pritchard and fortepianist Steven Vanhauwaert.

Originally from rural Northern Nevada, McIntosh is currently based in the Los Angeles area.